Sarabande is a relatively new addition to the up and coming Languedoc wine region within a region of Faugères.

It's run by two knowledgeable and friendly folk, Paul and Isla Gordon.

Their wines, produced from small parcels around Faugères, are superb drinking.

I was lucky enough to visit their house in the village during August and taste a few of their recent vintages.

They make several reds and a rose, and promote their work and wine via this enjoyable blog.

As you'd expect for the region, the grapes are mostly Carignan, Mourvèdre, Syrah and Grenache.

Those I have sampled are pictured below (pinched from their blog but I hope they won't object). Their wines range from 7-8 Euros for the Rose, to 12.50 for the AOP Faugères and 25 Euros for the excellent "Les Espinasses".

Here's where to go to consider buying the wines. For cutting-edge boutique wine (if that's not too silly a term, which it may well be) from an emerging region lots of wine fans are excited about, it's well worth trying a few. 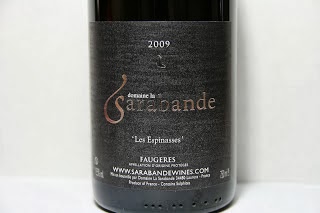 Les Espinasses, left, is powerful stuff. At 15% it needs food to accompany it, but drinks beautifully.

I'm finding I am enjoying the good newer wines from the Languedoc more than my traditional Côtes du Rhône at the moment. They seem less predictable. Perhaps because they are new to my palate.

For value drinking, the bottle just below, AOP Faugères is pretty unbeatable at below £10 a bottle (pre UK tax).

I'll be buying a case of this as as soon as my 2011 Clos d’Alzan Côtes du Rhône Villages Signargues 2011 is exhausted. That arrives next week from those excellent folk at Fromvineyardsdirect.com.

The Sarabande rose is also below. It's keenly priced, although I found it a little acidic. But that's probably me more than the wine. For some reason I find a lot of rose too acidic to have more than a glass of. For rose fans, I'd say try it, it beats buying from supermarkets any day. 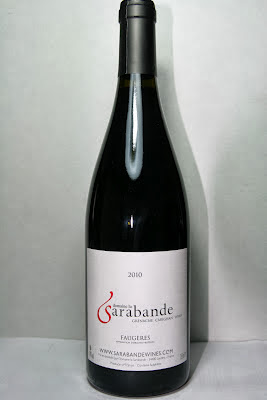 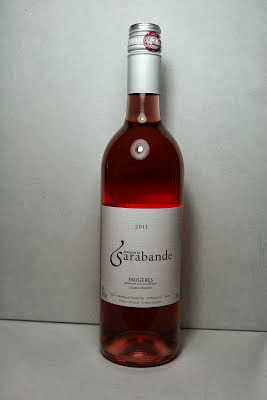